Choose your level of information

'At a Glance' offers a brief summary of key findings for each of the 13 Alaska Salmon and People regions.

Select 'Dive Deeper' for an in-depth look into the patterns and processes leading to the diversity of the 13 Alaska Salmon and People regions we see today.

At a Glance:  The decline, rise of alternative management, and rebuilding of the Kuskokwim region. 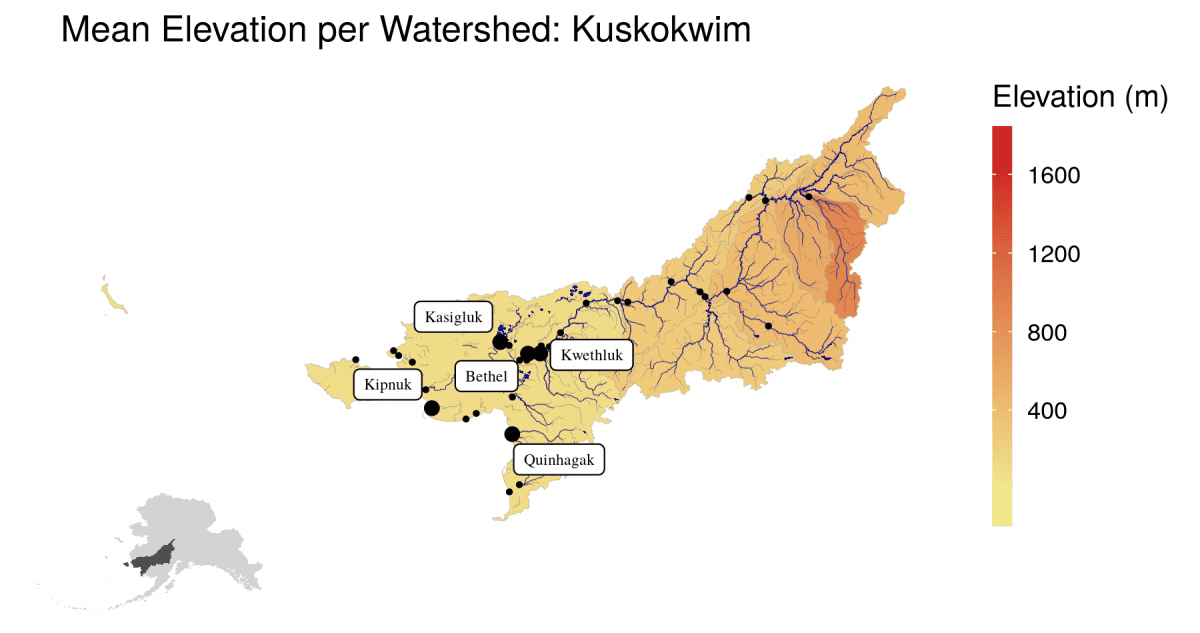 Combined efforts to reduce harvest of depressed returns of Chinook salmon came at a great societal cost in the region. Yet these efforts are apparently working, as the abundance of salmon is rebuilding.

The decline of total abundance of Chinook salmon – the most culturally important species of the region – was the catalyst that accelerated the rise of new management frameworks and partnerships. Through greatly reduced harvest by local users, the Chinook salmon resorce has begun to rebuild, increasing the number of potential spawning individuals (i.e., escapement). The rapid rise of other species such as sockeye salmon have, at least in part, mitigated the loss of Chinook salmon but is not a perfect replacement. 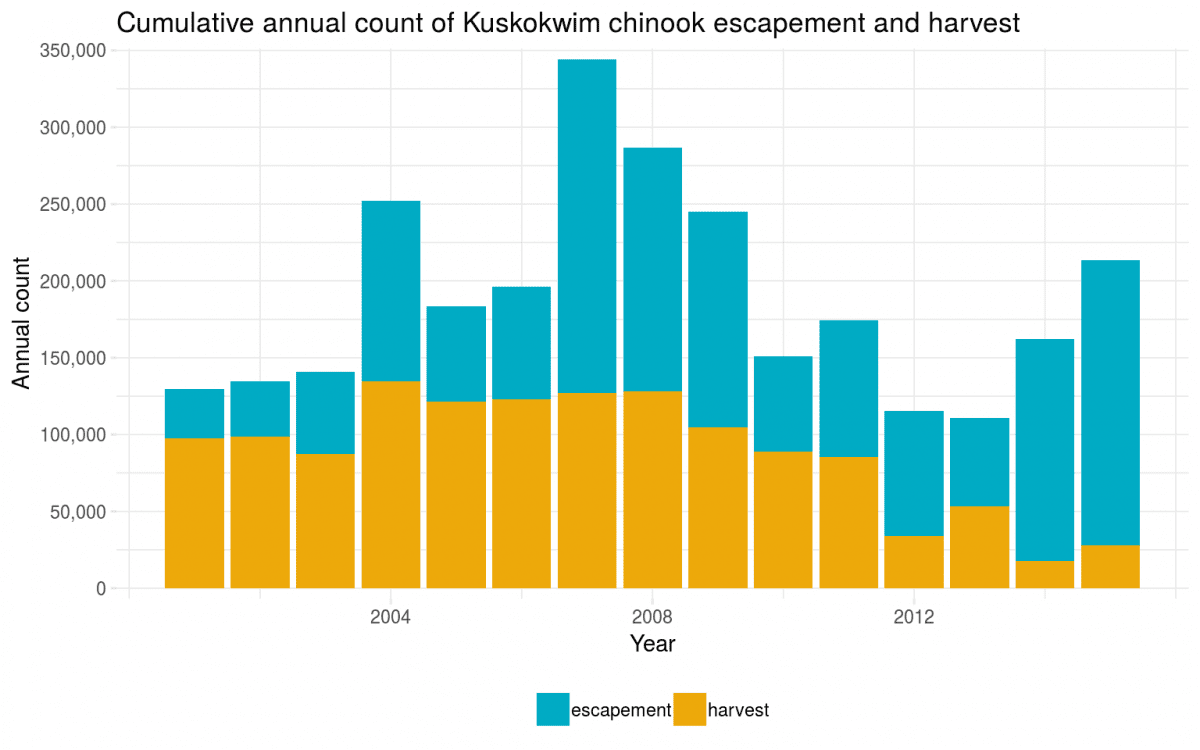 The Kuskokwim River connects cultural values and traditions between the people, land, and animals of the region.

Ancient residents of the Central Yup’ik region followed the seasonal round of subsistence by returning to permanent winter settlements and dispersing seasonally to spring and summer/fall camps for harvest of marine mammals, fish, and caribou. The increase in use of nets to catch salmon is suggested as the reason why the Norton Tradition people grew significantly in number roughly 2,400 years ago. Subsistence practices continue to be critically important and have incorporated modern harvest technologies. A string of poor Chinook salmon returns in the 1990s caused fishery closures and restrictions on harvest for both commercial and subsistence fishermen.

Hintz family at fishcamp near Bethel. Courtesy of Marty Hintz.

Subsistence salmon harvests in the Kuskokwim Area have historically ranked second to those of the Yukon River. Comprehensive household surveys show that salmon provide 45% of the total subsistence harvest, as estimated in usable pounds in Kuskokwim Area communities. Until 2001, there were few regulatory restrictions on subsistence salmon fishing in the Kuskokwim Area, with no permit or harvest reporting requirements. Following declines in Chinook and chum beginning in 1997, state and federal managers adopted a management plan that allowed implementing a subsistence fishing schedule in June and July to achieve escapement goals. 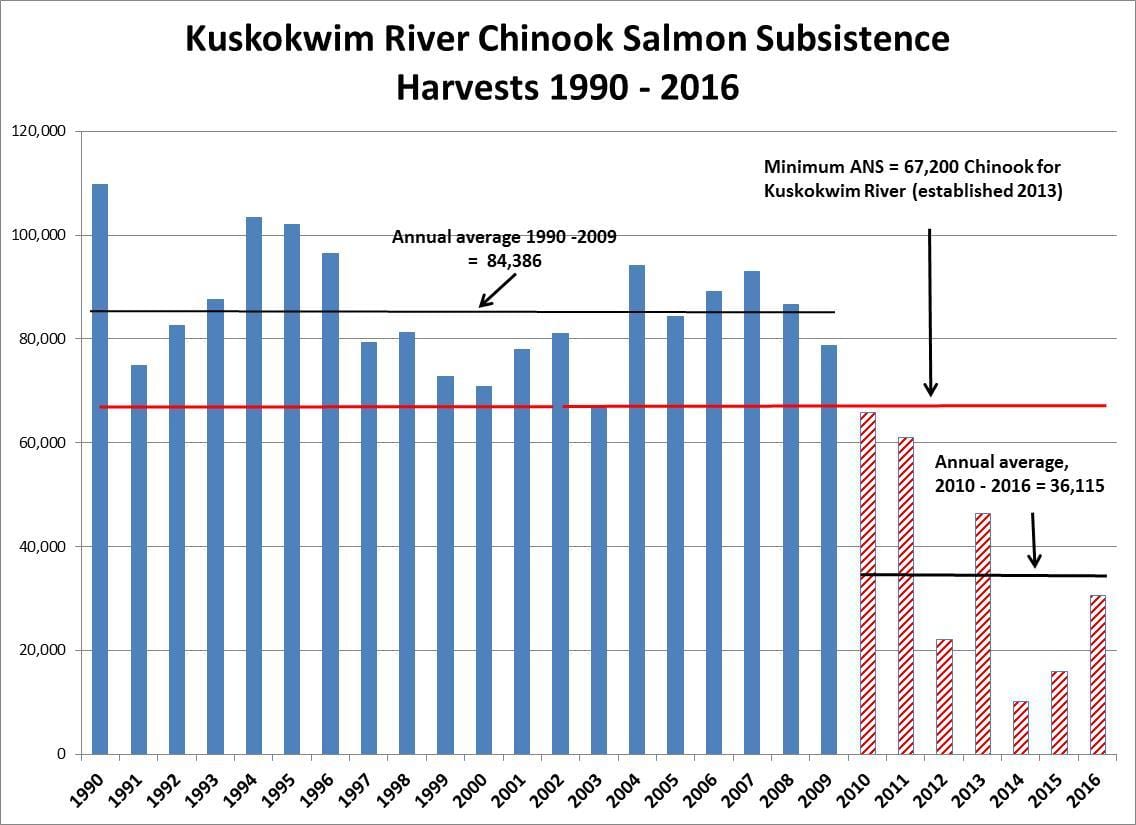 Chinook harvest in the Kuskokwim River, 1990 – 2016. Alaska Department of Fish and Game, Division of Subsistence. Subsistence and personal use harvest of salmon in Alaska, 1960-2012. Knowledge Network for Biocomplexity. doi:10.5063/F18P5XTN.

Governance dynamics in this region arise from deep-rooted Yup’ik beliefs and traditions, Chinook conservation challenges, and emergence of a tribal collaborative management commission.

Governance has evolved rapidly, with a growing presence of state and federal managers post-1980s. Yup’ik residents asserted the validity of their traditions for resource use and called for co-management programs. The Kuskokwim River Salmon Management Working Group, state Advisory Committees, and federal subsistence Regional Advisory Councils reflect this dynamic. When Chinook stocks collapsed, harvest restrictions were implemented. In 2012, a number of residents fished during a closure, resulting in law enforcement. In legal challenges, the court found that Yup’ik subsistence fishing is a religious-based activity, but that the state’s conservation responsibilities were paramount; citations and fines were upheld. Seeking more consequential governance roles, tribes worked with federal managers to create the Kuskokwim River Inter-Tribal Fisheries Commission. 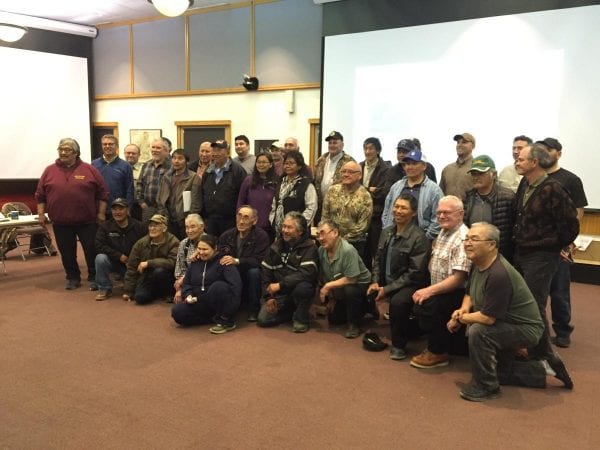 Commercial salmon fisheries in the Kuskokwim have historically generated over $230 million in revenue to harvesters since 1975 (2017 inflation-adjusted dollars).

The Kuskokwim commercial salmon fishery primarily relies on chum salmon returns and is comparatively small in value and volume compared to other commercial salmon fisheries in the state. However, the fishery is important for generating cash income supporting local cultural traditional activities, particularly subsistence fishing. Most of the revenue generated by commercial fisheries stays in the region as it is largely retained by local rural permit holders. 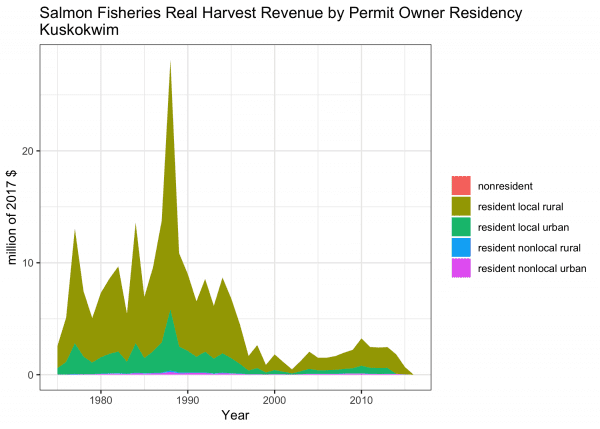 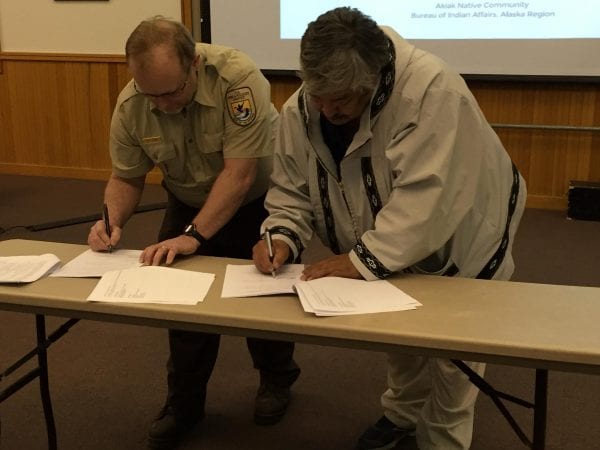 The emergence of the Kuskokwim River Inter Tribal Fisheries Commission represents a significant new avenue for tribal involvement in Alaska fisheries management. This case study examines the context, the crisis, the aftermath, and the subsequent institutional emergence. The context of the Chinook salmon crisis and responses on the Kuskokwim River is founded in the strong traditional values and beliefs among the Yup’ik people of the region, notably in respect for the natural world, humility, and generosity with subsistence foods. As western management increased in the 1980s, Yup’ik residents asserted their right to have a voice in management, resulting in several early co-management initiatives. The Kuskokwim Salmon Management Working Group was established in 1988 as a forum in which managers and users shared observations about run strength and harvest opportunities.

The rise of federal subsistence fisheries management in the 1999 created new institutional complexity. While ADF&G is the predominate fisheries manager on the river, 94% of the regional population resides in 20 villages within the Yukon Delta National Wildlife Refuge and a proportional share of total salmon subsistence harvests occurs in these federal waters.

The Chinook run crisis on the Kuskokwim River starting in 2010 prompted severe restrictions on subsistence harvests and a crisis of legitimacy in the long-standing consultation processes. Total escapement in 2010 and 2013 was below the lower bound of the ADF&G escapement goal. Chinook salmon were an especially valued food source, so a sharp drop in subsistence harvests and proposed restrictions led to strained discussions in the Working Group. To address the weak run, managers proposed “rolling closures” during the periods when the Chinook made a higher proportion of the salmon run. With reservations, the Working Group generally agreed to these sacrifices to restore the run.  However, in June 2012, ADF&G proposed a five-day extension to a seven-day closure for a total of 12 consecutive days. The Working Group did not agree with this strategy, requesting instead a small fishing window before the extended closure. The Working Group emphasized the hardship this would cause.

On June 20, 2012 fishermen from Tuntutuliak to Tuluksak began fishing in violation of the closure. Two villages had issued statements encouraging traditional Alaska Native fishing despite the closure. Law enforcement personnel from the Alaska State Troopers and the U.S. Fish and Wildlife Service issued 61 citations and seized 21 nets and 1,100 pounds of salmon. In all, the weak run and the restrictions resulted in a major collapse in the subsistence harvest in 2012. Families obtained just 25% of the long-term average annual harvest of Chinook salmon.

In the legal aftermath, a few fishermen plead guilty in return for reduced fines, but most went to trial in the Bethel District Court in fall 2012 and spring 2013.  The Yup’ik fishermen argued that their fishing was a religious-based activity, based on their traditional beliefs regarding respectful behavior toward Ellam Yua, the spirit of the universe. The state argued that the severity of the Chinook run decline justified the restrictive measures. Importantly, the judge ruled that the fishing was a religious-based activity, but that the state’s “compelling interest” in protecting the Chinook run overrode the religious practice.

The fishermen were found guilty and fines were imposed, generally for $500 with half suspended and probation for one year. The seized nets were returned. Thirteen of the fishermen mounted an appeal, joined by the Association of Village Council Presidents, the Alaska Federation of Natives, and the Alaska Civil Liberties Union. In its decision in March 2015, the Alaska Court of Appeals applied the standards of the Frank funeral potlatch decision and upheld the trial court decision. The fishermen declined a further appeal.

The political mobilization and pressure for new institutions mounted in the months following the arrest of elders and seizure of fish. AFN devoted a portion of the October 2012 convention to discussion of these events. At the federal level, AFN and AVCP used their Washington contacts to urge a new approach from the Department of the Interior. At the AFN convention in 2014, DOI Deputy Secretary Michael Connor announced plans to develop a federal Kuskokwim Demonstration Project to better engage tribes. Inspired by the Northwest Indian Fisheries Commission, in May 2015, 33 tribes of the Kuskokwim River met and established the Kuskokwim River Inter-Tribal Fisheries Commission. Their constitution identified the membership, the Chairman role, and the Executive Committee, including balanced representation from all segments of the river.

In May 2016, following two years of intensive negotiations, a Memorandum of Understanding was signed between the U.S. Fish and Wildlife Service and the Commission. It provides for regular consultation with the federal In-season Manager and consideration of the knowledge of the Commission members and the agency managers concurrently. The parties agreed to negotiation in good faith, seeking consensus on run forecasts, subsistence levels, and in-season regulations. In event that consensus not reached, MOU outlines recourse to revisit issue including further discussion, using the Yup’ik consensus building approach of the qasgiq, and elevating issues to the USFWS Regional Director if necessary.

In subsequent years, the Commission and the In-Season manager have consulted intensively, as the Federal Subsistence Board authorized federal management within the Refuge waters. Tribes played an important role in implementing a community permit system for fishing in 2015 and 2016. The Commission continues to build capacity and technical expertise to help rebuild Kuskokwim River salmon stocks and provide for the needs of the villagers who depend on salmon for their sustenance.